We want our children to become independent and responsible members of a society who understand and explore big questions about life, to find out what people believe and what difference this makes to how they live, so that they can make sense of religion while reflecting on their own ideas and ways of living. Children will be supported to engage and think rigorously and creatively in order to make informed judgements; they will come to understand that it is acceptable to have doubts and to disagree in a reasoned and sensitive way. In the process, they will develop an aptitude for dialogue so that they can participate positively and develop the skills to be able to examine and reflect on a range of questions about spirituality and identity, morality, values and commitments. We want them to know that religious education promotes discernment and enables pupils to combat prejudice therefore preparing them to be thoughtful members of our diverse and multi-cultural society.

Welford on Avon Primary RE curriculum follows the Coventry and Warwickshire Agreed Syllabus, 2017.

“Through their work pupils should learn that religions have a commitment to morality and social justice promoting social and ethnic harmony. RE in Coventry and Warwickshire Schools should be challenging, inspiring and fun.”

RE is taught through discrete lessons. The topics and vocabulary have been organised and sequenced in a logical way to allow new knowledge to build on prior learning.

The RE Agreed Syllabus requires that schools enable pupils to explore Buddhism, Hinduism, Islam, Judaism and Sikhism as well as Christianity. It also encourages the consideration of secular world views. Progression through the Key Stages are as follows:

Discovering in Foundation Stage: Children encounter Christianity and other faiths as part of their growing sense of self, their own community and their place within it.

Connecting in Key Stage 2: Children will develop a deeper understanding of all 6 principal religions (Christians, Muslims, Jewish people, Sikhs, Buddhists and Hindus) but there is a deeper focus on Christians, Muslims, Jews and Hindus. Children will look at religious groups who work to foster good moral behaviour and religious groups that encourage peace and forgiveness.

The impact of the RE curriculum delivered aims for: 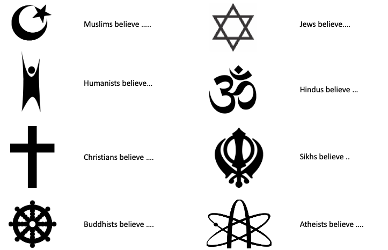